Directed by 3TOON, this cartoon takes the form of a musical tale which aims to raise awareness for children and adolescents the threat conveyed by the mosquito (which transmits the virus), and how to protect themselves simply to the danger. A figure provides the fullest extent of the scourge: malaria kills a child every 30 seconds. 3TOON is honored to use its know-how for the realisation of this message, and contribute to reversing the scourge. 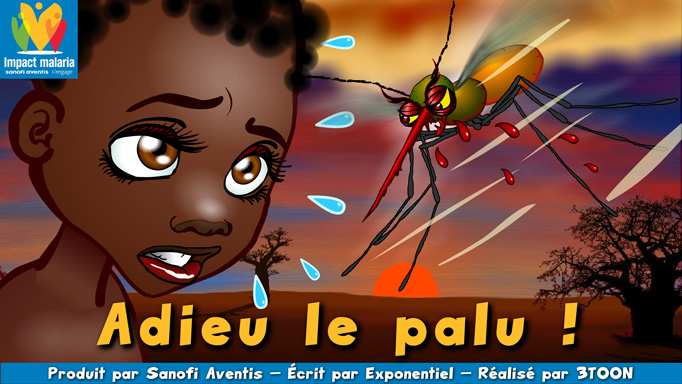 A figure provides the fullest extent of the scourge: malaria kills a child every 30 seconds.

To fight against this calamity, the most effective way is prevention. This cartoon is a medium of awareness in the fight against malaria. The first vocation of this educational tool is to explain the vital interest of the net, in order to bring about a change of behavior which still remains the best way to protect themselves from this disease.

3TOON is honored to have been able to use its know-how for the realisation of this message, with the hope of contributing to roll back the scourge. Unlike all of our other productions, it is not humor who chose to move the message, but the combination of two other dramatic Springs: fear (of the mosquito) and courage symbolized by the figure of the little sister.

Sanofi-Aventis – farewell palu!
With night falling, a terrible danger appears… in the form of a mosquito thirsty!

From storyboard to final rendering…

Two examples of the final rendering in the cartoon.

The lizard, animation for creative workshops