A customizable movie is to make it different and unique vision to each viewer. The most telling example is the introduction of your avatar in the movie, among other characters. 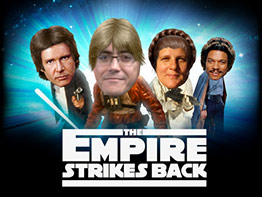 The movie "the empire strikes back" in a spin with the founders of 3TOON, Violaine Meunier and Ali Bali.

Have you played in the "Star Wars" movie? We, Yes!

In fact, it is now possible for everyone since Jib Jab {snippet lienblank} site offers you to create your own version of the movie "the empire strikes back" with your face instead of one of the 4 main actors from the original film. It is the specialty of this site that offers many other short films customized for several years, on the principle of the e-cards (or e-cards).

To give you an idea of the success of the initiative, they are, each year, 100 million users who circulate their films customized by Jib Jab, a large proportion of paid users!

The empire strikes back (custom movie)
The founders of 3TOON took over the roles of Princess Leia and Luke Skywalker. 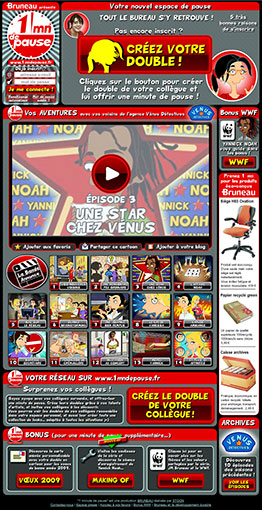 The interface of the site dedicated to the series "1 minute break". Top of page, visitors are invited to create their cartoon avatar. 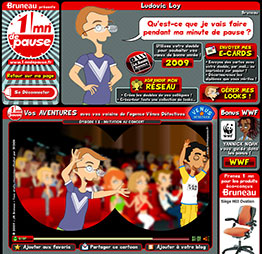 The same interface, this time in his customized version (in the example, for Ludovic Loy, marketing director of JM Bruneau).

When the idea of a third season began to be discussed with the marketing director of JM Bruneau, the level of ambition was particularly high. In the discussions, among the proposed innovations, such as the marked shift to Brand Content, appeared the idea of making the customizable web-series with the avatar of the fournituriste customers.

3TOON then engaged in a lengthy technical process to allow all viewers of this new season to project themselves to the sides of the characters of the Agency Venus detectives in the form of a cartoon avatar. A difficult challenge, because customize a series is far more complex than a simple card…

It was a mission accomplished a few months later, and the 15-episode series was offered to all customers of JM Bruneau, with, as a bonus, the presence of Yannick Noah, who their avatar could interact.

Opportunities provided by a custom movie

Once the Viewer is engaged in the customization process, the possibilities that are open are immense. In the case of the web-series "1 minute break", all the episodes were available from a URL customized, such as:

A Web address that Internet users could share with their colleagues or friends.

Outside to see the episodes with their avatar mingling with the action, the visitors also had at their disposal 7 th – customizable cards incorporating their cartoon avatar.

They also had the opportunity to manage a whole gallery of different looks for their avatar to use over the cravings or moods.

Finally, a community part allowed them to interact with avatars of their friends, and to offer them alternative looks!

In addition to the intrinsic qualities of the series, which had already met success in two previous seasons, all these innovations led the series to receive a very important press coverage and visibility incommensurate with previous operations of brand communication. What makes the example "1 minute break" one of the most ambitious experiments of Brand Content in France.

Below, you can watch the series, without customization. To dive into the series, you and your avatar, visit the dedicated website: http
://www.1mndepause.fr/ {snippet lienblank}

Bruneau – Season 3-1-minute break, with Yannick Noah
The trailer, 14 episodes, and a mini-making of.